This year, I had a fuck this moment. I decided that I want to be able to do something interesting with my life. And with the help of 30×500, I actually started working towards it.

To me, “doing something interesting with my life” means making things people love. In my position, the most immediate way I can achieve this is by writing about the Web – it is the thing I’ve spent the most hours of my life doing, and I care possibly a little too much about making it better.

But enough being serious – the real reason I’m writing this is that 100 signups is the best excuse I’ll get to look back at what went well, what didn’t, and how to improve things. And to show you lots of pretty graphs!

And since it’s that kind of article, I’m going to put the meat before the veggies and start with:

The biggest surprise for me by far was that:

In more concrete terms, the length of my articles seem to be uncorrelated with the amount of organic traffic I get: 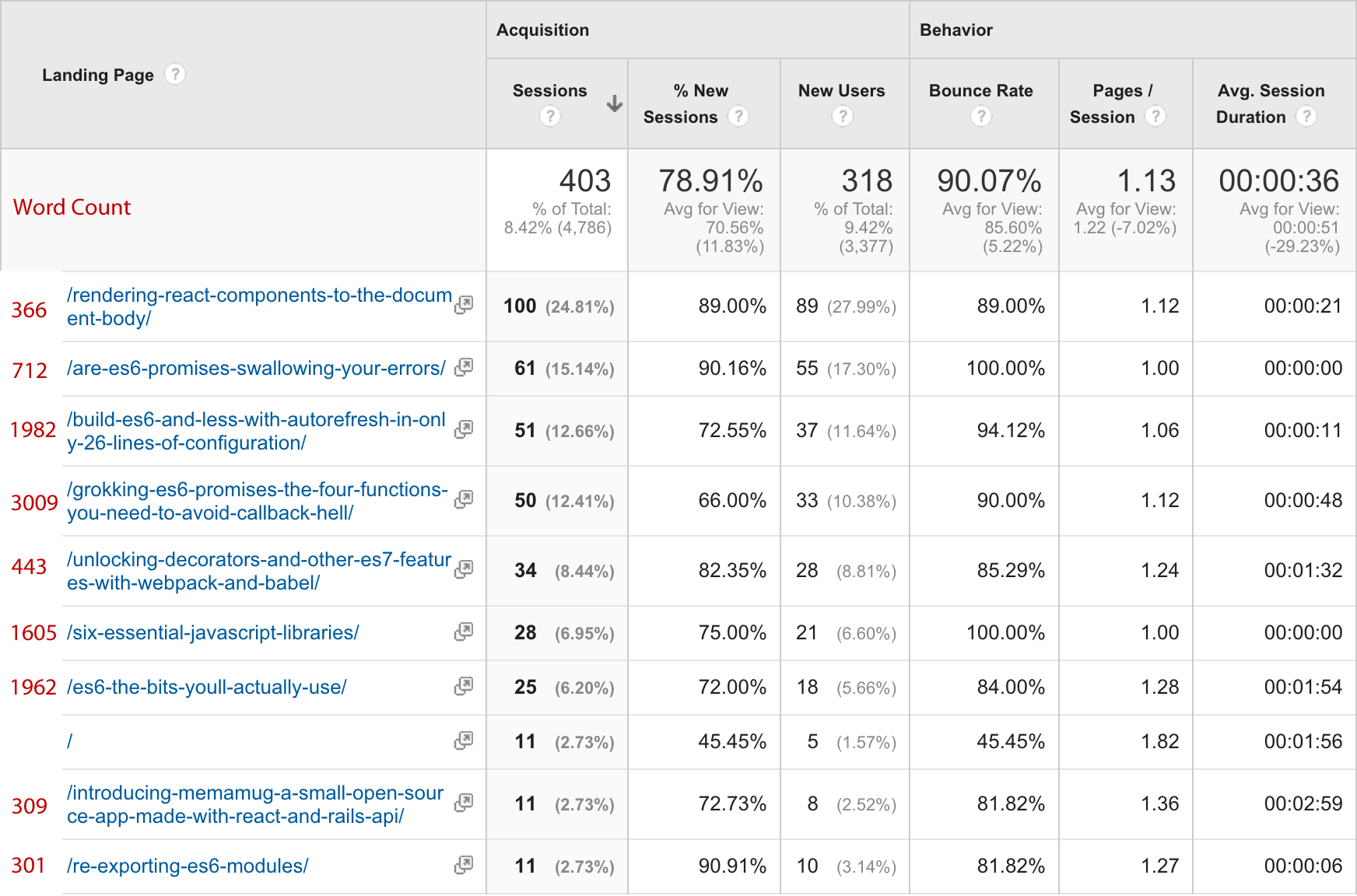 Furthermore, the correlation between length and the number of social network shares still doesn’t seem that high: 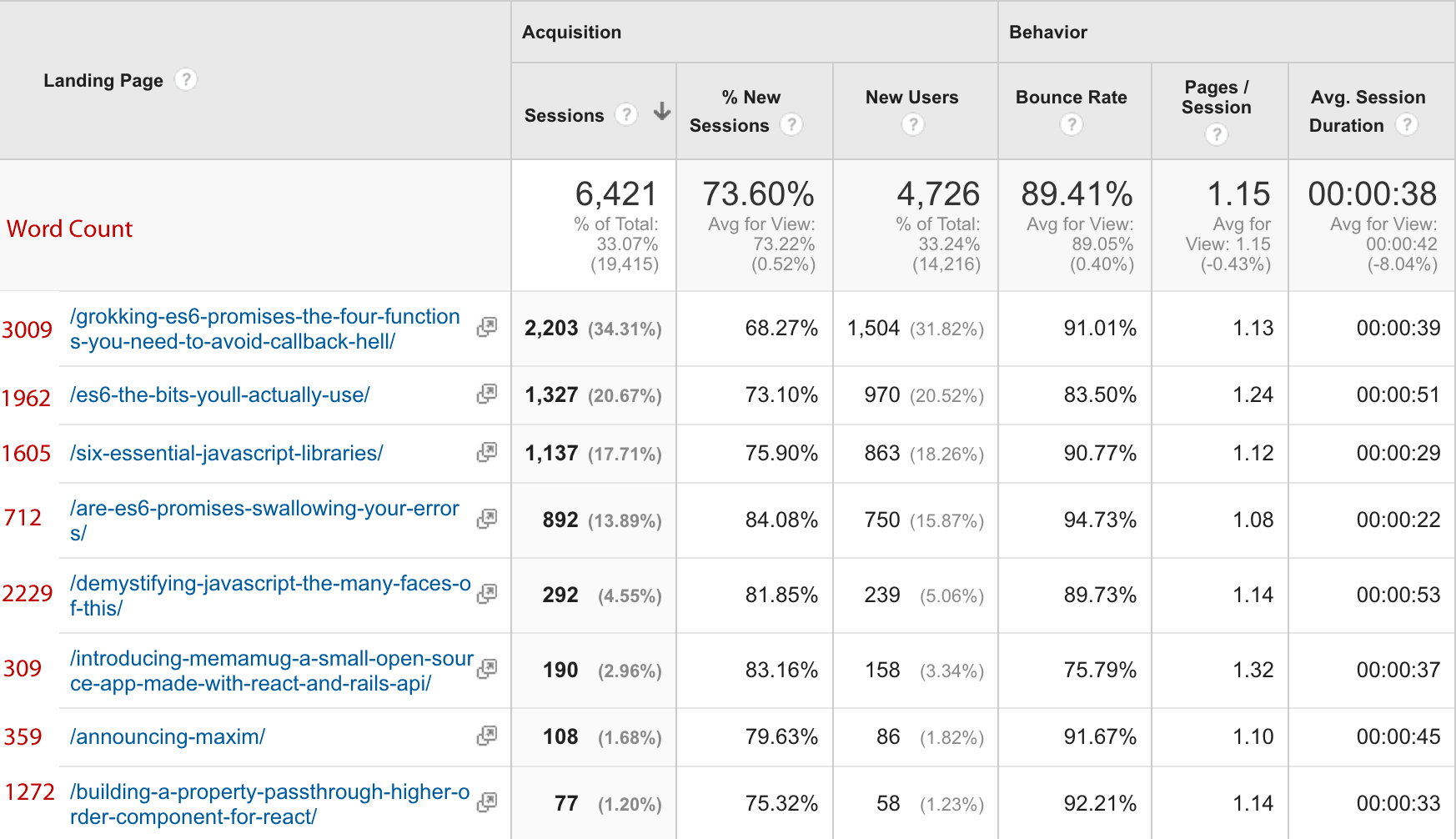 For me, this puts some data to @amyhoy‘s constant nagging to write crispy articles, as opposed to meaty. People don’t care if you know everything there is to know about a topic – they care that you can help them solve the problem they are having right now. Or, if I may, people would rather eat crispy bacon than raw pig.

Another thing that surprised me is that my newsletter’s conversation rate has varied greatly over time. You can see this in the fact that this month has received by far the most signups, even though it hasn’t received that many visits, and even though we’re still only two-thirds through:

A lot of the variability here can be explained by the traffic’s source. In particular, some research and commiseration with other bloggers seems to show that Reddit/Hacker News mostly consists of people with a highly developed “anti-commercial” filter. While this doesn’t make me any less happy about the readership they provide, it does leave me puzzling over how to get them to help me pay the bills (which obviously is a pre-requisite to writing).

The 1000-pound gorillas out there are actually kinda friendly

Surprisingly, Reddit/Hacker News weren’t my biggest sources of traffic – other industry-specific publications were. In particular, JavaScript Weekly and FiveJS provided some big boosts in readership and newsletter signups. 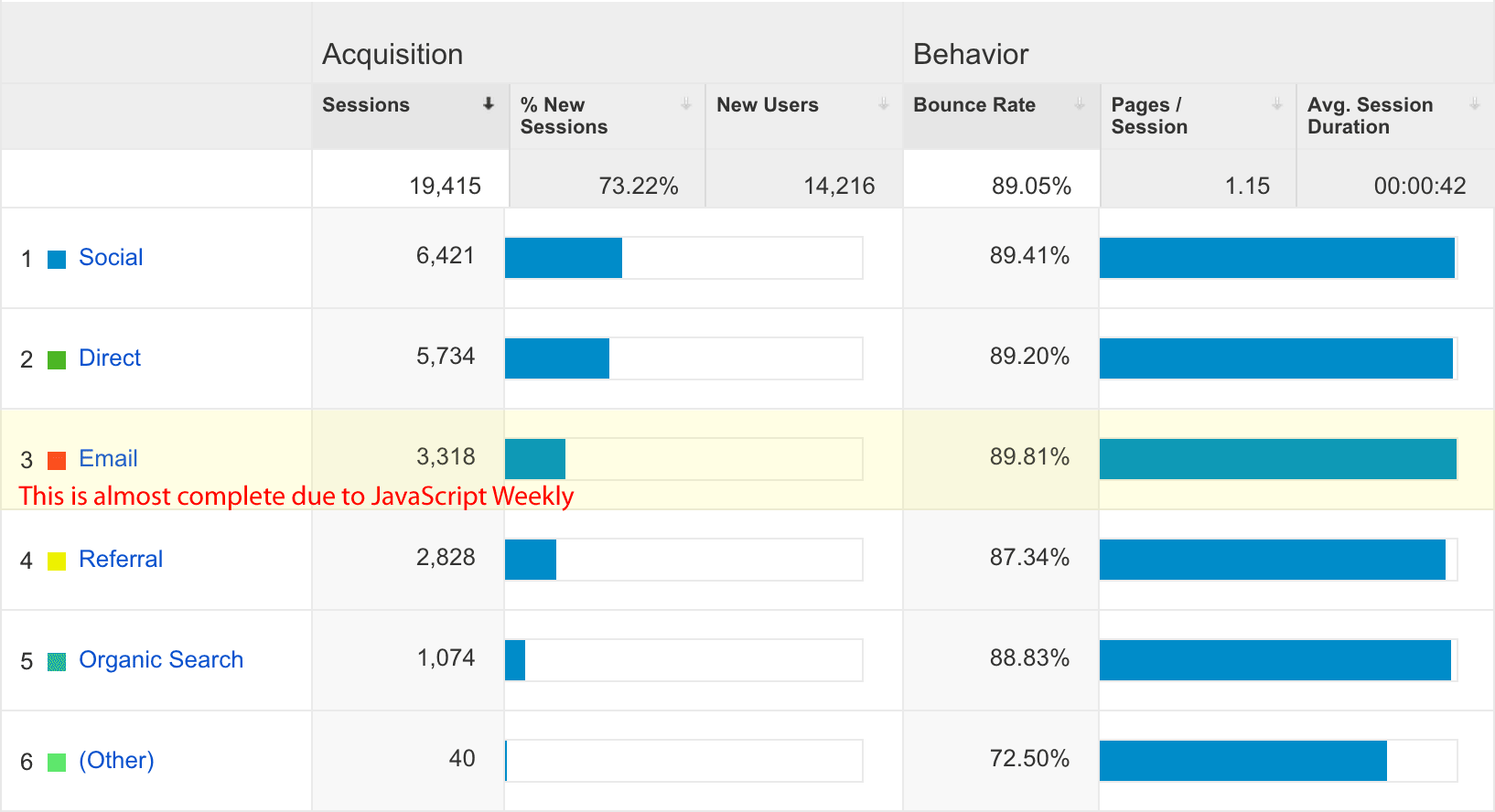 While it is obviously not a good idea to rely too much on help from others, I am incredibly thankful for the leg-up these heavyweights provided. The traffic certainly helped, but even more than this the fact that people who know what they’re doing found enough use in my work to feature it helped hugely with the motivation to keep going.

What else went well

As well as receiving a lot of undeserved help, there were a bunch of things which went well for me. Here are four that stood out:

30×500 also provided the questions which would lead to those answers, but that doesn’t help if you’re too stubborn to use them.

How I messed up

My biggest mistake was not listening to @amyhoy‘s advice, and instead:

Writing meaty articles instead of crispy ones

Let me preface this by saying that meaty articles are not necessarily a bad thing. Covering all there is to know on a topic does earn you a little bit of trust – and after all – the currency of the the blogging world is trust. However, with this said, there are better ways to to build trust. In particular, actually solving people’s problems.

The thing is, when people have the problem of needing to learn everything about a subject, they read a book on it. However, when people have a single problem which they want to solve, they’ll ask Google for a solution. Google then crunches some numbers, analyzes the alignment of the planets, and tells the perplexed developer to visit my blog. Or in the case I don’t have any articles which closely match what they’re searching for, it tells them to go somewhere else.

To put some numbers to this, here is the data on the number of referrals my top 10 articles have received from search engines over the past 2 weeks, compared to the number of page views each article has received in total over the past 3 months. I’ve highlighted the “authoritative” articles:

But James, you ask, why do you say it was a mistake to write crispy articles when your meaty ones have been so much more successful? Great question!

At this point, most of my traffic is from social networks. However, over time the split between social and organic traffic moves sharply in the other direction. To demonstrate, here is the split between sources over the last two weeks for my first publicized article (released about 2 months ago): 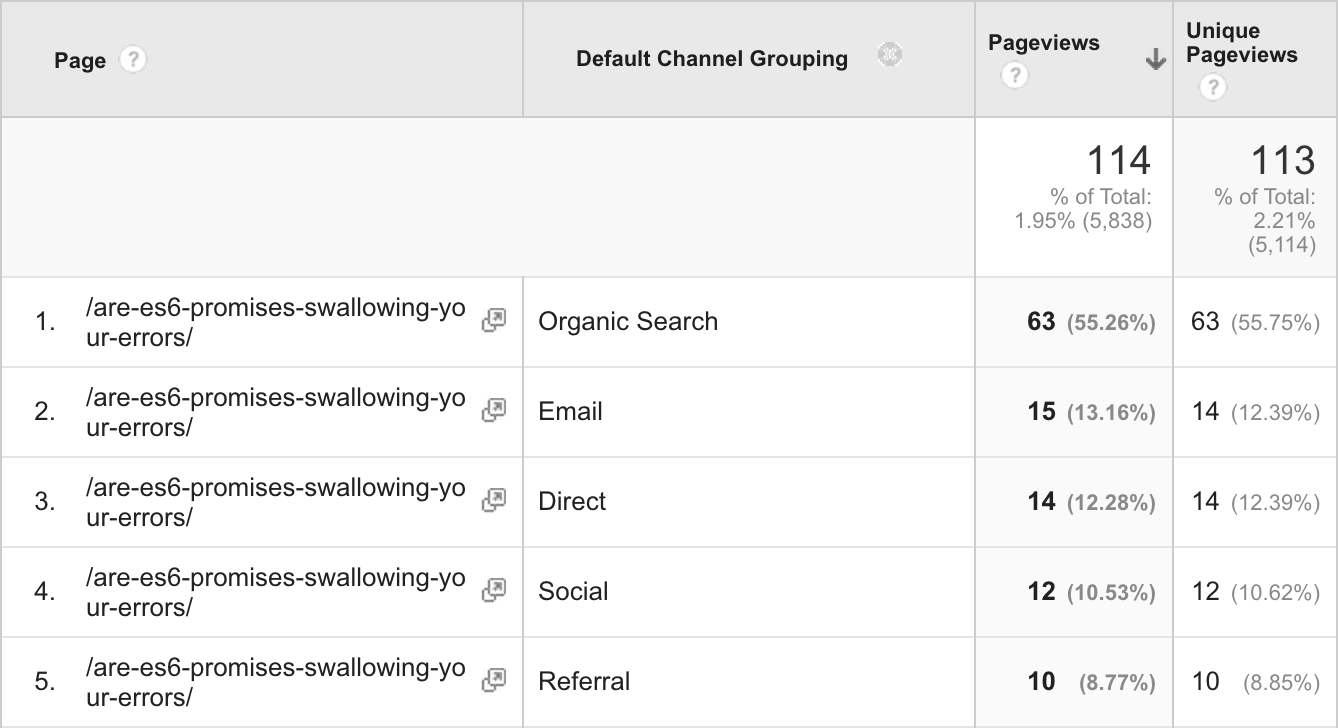 To give an even more extreme example of this, rendering react components to the document body was my first article. I never publicized it at all, so all of the traffic is effectively search traffic. But it is already getting more search traffic than a number of articles which a month back were much more popular.

Note: I obviously still have a lot of learning to do, seeing how long this article is. 頑張ります！

Or to be a little less dramatic, too much focus on Reddit and Hacker News. The huge increase in conversion rate I noticed when I was featured on FiveJS really drove this one home for me – I went from something like one newsletter signup per 200-300 views to one for every 20.

Now it should be said that my goal isn’t collecting e-mail addresses – it is helping people create amazing things. However, my hunch is that signups are a better metric for whether I’m accomplishing this than page views – people who want to stay in the loop are probably more excited about what they’re learning than people who just close the tab.

Finding good traffic sources won’t be an easy job, but it feels like I’d be doing myself a disservice by avoiding it. And a disservice to all the people out there who want to read what I’m writing but don’t waste their time refreshing news aggregators all day.

While I’ve been able to get away with only working four days a week, it would really be better if I could keep this down to three. There are two reasons for this:

The obvious one is that researching what users want and writing about it takes time. More time naturally means more and better articles. This probably doesn’t surprise anyone. What did surprise me, however, was the amount of things I learnt while working on my own projects, like Memamug.

The problem is that no matter how well you know your readers, you won’t help anybody if you can’t actually answer their questions. Just like a professional musician still needs to practice, an amateur technical blogger still needs to code. Not understanding this led me to working a lot longer hours than I should have, and quality probably suffered as a result. The takeaway is that I need to schedule time for both writing and practicing.

How I can improve going forward

So with all said and done, here are my goals for the time between now and 500 subscribers:

Finally, while this article has been pretty meta, a post about the road to 100 signups wouldn’t be complete without a call to action: If you want to make Single Page Apps which people love, you’ll receive a huge head start by signing up to my mailing list. And in return for your e-mail, you’ll also immediately receive 3 bonus print-optimised PDF cheatsheets – on React, ES6 and JavaScript promises.